Why is the Dead Sea a Hot Spot for Health?

People from all over the word are realizing the health benefits that the Dead Sea area in Israel possesses. Some go directly to the waters convinced they will be healed, while others are buying products containing minerals for healthy skin. Have you ever stopped to wonder what makes this salty sea so spectacular?

The environmental impact on health.

One of the most unique aspects of the Dead Sea region is the climate. Even though it is a warm sea area, it is does not have the typical atmosphere of humidity, this helps reduce the impact of irritants and pollen in the air. Its deep waters are 1300 feet below sea level making it the lowest point on earth and the saltiest, as well.

The Dead Sea water and claylike muddy shores contain minerals such as magnesium, calcium and potassium. These minerals are thought to reduce inflammation, stress and maintain healthy blood pressure.

In regards to agriculture, whatever is in the soil… is in the plant. When plants and vegetation are grown in or around these nutrient-dense soils, the plant life naturally absorbs up the vitamins and minerals, thus producing amazingly healthy foods when harvested.

Because of the dry, arid climate of the Dead Sea, plants that produce edible nutrition must be hardy and strong. If there was a plant that was able to embody the vitamin and minerals of the Dead Sea itself AND withstand the dry climate how amazing would that be?

The moringa plant does just that… it’s easy to grow in harsh environments, and once planted, only needs watered for the first couple of months and then only when the plant appears dry. It “bounces back” very quickly, even after being cut down and harvested.

Because this plant has so many outstanding qualities in terms of health and durability, the added aspect of being planted in the mineral-rich soil of the Dead Sea only enhances its potential.

We’ve looked at how the atmosphere of the Dead Sea is thought to produce a host of benefits to the body, but is this all coincidence? Or is there a bigger reason this plentiful land produces life-giving properties?

Did you know the Dead Sea also has rich spiritual history?

The Dead Sea is mentioned several times throughout the Bible. Many cultures and people credit the area to hold keys to the history, and possibly the future, of all humanity.

Joshua led the Israelites across the Jordan River into the Promised Land. God not only parted the Red Sea for Moses, but the Jordan River, flowing down to the Dead Sea (also known as the Salt Sea), for Joshua!

Joshua, Chapter 3 reads that the Jordan River was at flood stage, but “…as soon as the priests who carried the ark reached the Jordan and their feed touched the water’s edge, the water from up stream stopped flowing… while the water flowing down to the Sea of Arabah (the Salt Sea) was completely cut off. So the people crossed over opposite of Jericho.”—Joshua 3:15-16

Possibly the most exciting and promising aspect of the region is mentioned in Ezekiel. The prophecy of the Dead Sea being renewed and literally refreshed points us to the magnificent transformation that will take place in our future.

“Then he led me back to the bank of the river. When I arrived there, I saw a great number of trees on each side of the river. He said to me, ‘This water flows toward the eastern region and goes down into the Arabah, where it enters the Sea. When it empties into the Sea, the water there becomes fresh. Swarms of living creatures will live wherever the river flows. There will be large numbers of fish, because this water flows there and makes the salt water fresh; so where the river flows everything will live. Fishermen will stand along the shore; from En Gedi to En Eglaim there will be places for spreading nets. The fish will be of many kinds—like the fish of the Great Sea.’”—Ezekiel 47:6-10

The image of the Dead Sea, being 25 percent salt and teaming with life, may be hard to fathom. However, we do see many life-giving and sustaining properties coming out of the area today. Therefore, perhaps “a great number of trees” is in-fact possible!

At Dead Sea Moringa, we have partnered with Trees for the Future to plant trees in 19 countries. For every bottle of Dead Sea Moringa purchased, a tree is planted with Buy One Get One Tree. Our hope is to plant a great number of trees to provide humanitarian aid around the world, and harvesting the moringa tree for you! 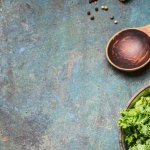 Dead Sea Moringa | How Does Moringa Stack Up Against…Kale?Blog

What Does the Bible Say About Healthy Eating?Blog