Moringa Helps to Lower Inflammation in the Body 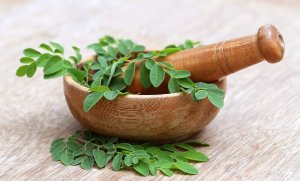 The tree is an important crop in regions like Southeast Asia, Latin America, the Middle East and the entirety of Africa, though it is native to India.

What’s particularly useful about the tree is that every single part of it is edible—its roots, flowers, seeds, gum, bark, fruits, and leaves can all be used in different ways. Though there are 13 species of moringa trees, the most common is moringa oleifera, the drumstick tree, which thrives in particularly sandy, drought-ridden environments.

There are many known health benefits associated with the moringa plant. For example, its leaves are 27 percent protein and contain all of the essential amino acids. They also have seven times the amount of vitamin C found in oranges, four times the calcium of milk by dry weight, and four times the vitamin A found in carrots. These are merely a few of the many nutrients packed into the plant, so it’s no wonder the plant is commonly used as a means of fighting malnutrition.

But what many people might not realize is that it’s also an excellent tool for fighting against inflammation in the body. There are a variety of studies being performed on the plant’s anti-inflammatory properties and potential.

One example is a study that was recently performed by Dr. Carrie Waterman, a researcher from the University of California, Davis (UC Davis). In a three-month study with other researchers by her side in Africa, Waterman and her team fed mice a high-fat diet supplemented with five percent moringa concentrate, a formula that delivers 66 mg/kg/d of moringa isothiocyanates. The results that were fed the moringa had demonstrable reductions in weight, hepatic obesity, gluconeogenesis, cholesterol, insulin, and yes, inflammation.

Previous research showed moringa has a number of anti-inflammatory properties because of the presence of those isothiocyanates, which is similar to that found in broccoli. Moringa will be used in further tests to determine whether regularly eating it can help to reduce chronic inflammation and thus reduce the chance or delay the onset of type 2 diabetes.