For centuries, thousands of people flocked to the Dead Sea to experience its renowned health-giving benefits. But the real reason people rave about these ancient waters is because of the rich mineral content.

Dead Sea minerals are unique from other ocean minerals. The Dead Sea’s salt is only 30.2% sodium chloride. The remainder of its salt content is the nutrient-rich minerals your body needs such as magnesium, potassium, and calcium.

Let’s dive into the supposed “dead” sea to find out what lies beneath the service.

What is the unique science behind the Dead Sea minerals?

The research at the Dead Sea surrounds a number of disciplines. From environmental to health researchers, you could say the Dead Sea spikes curiosity in scientists as much as tourists.

Interesting Fact: The Dead Sea is so salty because…

The landlocked lake allows water to flow in, but not out. The salt comes from the rocks on land. The rainwaters dissolve the rocks over time, leaving the salt to accumulate on the seafloor.

The Dead Sea is a site of scientific research

The Minerva Dead Sea Research Center is one of several research groups studying the Dead Sea fault valley and the area surrounding it.

The negative elevation of the surface and the high mountains close by promotes the arid environment. Scientists study the ecosystems around the sea to assess its impact on daily lives.

“Through its activities, the Center aims at understanding the man-made and natural processes along the fault in order to advance and actively effect public awareness and decision policies. Of special interest to the Center, is the Dead Sea Basin.”[i]

Scientists also study the variables and processes of evaporation. The Dead Sea provides a unique research site because it allows researchers to test and measure variables separately. In other lakes…

“…it is nearly impossible to extricate the individual effects of solar radiation (or sunlight), and wind speed on evaporation since the weather tends to be windy and sunny at the same time of day, and both tend to be lacking at the same time of night.”[ii]

This type of testing gives researchers more reliable research data when it comes to the mechanics of water evaporation.

Why is the science important?

When you understand how the environment works, you take better care of it. There is a connection between stewardship of the land and the nourishment it provides your body.

Today, everyone is going green and becoming more environmentally aware. The science backs our efforts to make better health choices that are also better for our environment.

The salts and minerals are the elements that keep those who take a dip in the Dead Sea coming back. This natural mineral bath is thought of as the ultimate spa retreat.

The Dead Sea salts and mud have been used for thousands of years and in various cultures to treat the following ailments:

The sea’s high salt and mineral amount, combined with the uniquely high oxygen content, lead many to believe this is the key to the regions health secret.

The environment, health, and the Dead Sea

The climate is unlike anywhere else on earth. It has a warm sea area, but it is not the typical atmosphere of humidity you’d expect from warm sea waters. As a result, this helps reduce the impact of irritants and pollen in the air.

The Dead Sea’s water and claylike muddy shores contain minerals such as:

The Dead Sea soil should also be known for providing plants with the nutrients in its soil. As for agriculture and farming, whatever is in the ground is passed onto the plant and to humans.

When plants and vegetation are grown in or around these nutrient-dense soils, the plant life naturally absorbs up the vitamins and minerals, thus producing amazingly healthy foods when harvested.

Because of the dry, arid climate of the Dead Sea, plants that produce edible nutrition must be hardy and strong. It is, for this reason, the moringa plant can thrive in the Dead Sea.

As you can see, the fertile soil of the Dead Sea—contrary to its name—has countless life-giving properties. Check out more about how Dead Sea Moringa got started, and how we uniquely harness the potential of the Dead Sea.

5 Practical Ways to Have a Healthy RetirementBlog, Health 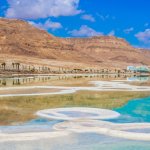 The Dead Sea’s Present Use and Rich HistoryBlog, Environmental, Health