The Biblical Significance of the Dead Sea Region

The Dead Sea, itself, is an inland body of water appropriately named due to the fact that its extremely high salt and mineral-rich waters are not conducive to sustaining life. In fact, the Dead Sea is nearly ten times saltier than any of the world’s oceans, and is twice as saline as the Great Salt Lake in Utah. 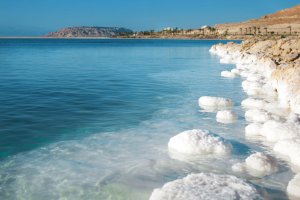 Also known in the Bible as the “Salt Sea” or the “Sea of the Arabah,” just to name a few, the Dead Sea is the setting for some of the most important stories in biblical history. Here are just a few of examples where the Dead Sea, and its region, are mentioned throughout the Bible:

David is one of the central figures of the Old Testament and is also mentioned several times throughout the New Testament. Long before he went on to become one of the most renowned, storied kings of Israel, he fled to the Dead Sea region to hide from King Saul, as recorded in 1 Samuel 23:29:

“Then David went up from there and dwelt in strongholds at En Gedi.”

In this same region, David entered into a cave where King Saul was asleep and snipped off a part of his garment to prove he had no plans of causing any harm to the king.

Ascension of Elijah and the Baptism of Christ

In one of the most memorable scenes of the Old Testament, Elijah ascends into Heaven in a chariot of fire. According to religious tradition, this is the same location where Jesus was later, baptized by John. Both events can be placed in this region, near the Dead Sea, because of John 1:28, which reads:

“These things were done in Bethabara beyond Jordan, where John was baptizing.”

This same location today is known as Qasr Al-Yahud, located on the Jordan River just North of where it flows into the Dead Sea.

The War of the Kings

There are some mentions in the Book of Genesis about a war that pitted four kings against five more in the Dead Sea region. Genesis 14:3 reads:

“All these joined together in the Valley of Siddim (that is, the Salt Sea).”

The “Salt Sea” is a clear reference to the Dead Sea here. Abraham and Lot were both key figures in this story.

When Israel Crossed the Jordan River

Joshua 3:14-16 tells a story of how God stopped the flow of the Jordan River in an area opposite of Jericho, so that the children of Israel could cross over into the Promised Land on dry ground:

“So it was, when the people set out from their camp to cross over the Jordan, with the priests bearing the ark of the covenant before the people, and as those who bore the ark came to the Jordan, and the feet of the priests who bore the ark dipped in the edge of the water (for the Jordan overflows all its banks during the whole time of harvest), 16 that the waters which came down from upstream stood still, and rose in a heap very far away at Adam, the city that is beside Zaretan. So the waters that went down into the Sea of the Arabah, the Salt Sea, failed, and were cut off; and the people crossed over opposite Jericho.” 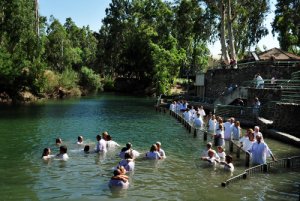 The “Sea of Arabah,” the Dead Sea, here is referencing the fact that the waters of the Jordan River temporarily ceased to flow into the Dead Sea while the children of Israel crossed over on dry ground into the Promised Land.

Scripture promises, through a prophetic vision recorded by the prophet Ezekiel, that the Dead Sea will live again one-day. When the coming Messiah rules the earth in the Millennial Kingdom, the vision shows that water will flow from Jerusalem’s Temple Mount, causing swarms of living creatures to live in and fishermen to line the banks of the Dead Sea.

“He said to me, ‘This water flows toward the eastern region and goes down into the Arabah, where it enters the Dead Sea. When it empties into the sea, the salty water there becomes fresh. Swarms of living creatures will live wherever the river flows. There will be large numbers of fish, because this water flows there and makes the salt water fresh; so where the river flows everything will live. Fishermen will stand along the shore; from En Gedi to En Eglaim there will be places for spreading nets. The fish will be of many kinds—like the fish of the Mediterranean Sea. But the swamps and marshes will not become fresh; they will be left for salt. Fruit trees of all kinds will grow on both banks of the river. Their leaves will not wither, nor will their fruit fail. Every month they will bear fruit, because the water from the sanctuary flows to them. Their fruit will serve for food and their leaves for healing.”—Ezekiel 47.8-12

What the Lord promises to do in that day is to bring life from death—ultimately bringing LIFE to the Dead Sea!

These are only a few of many examples of the Dead Sea playing an important role in biblical scriptures. The sea, along with the mineral-rich soil of the region surrounding it, have been significant for thousands of years, and continue to be so today. With recent discoveries of the tremendous benefits of growing plant life in the mineral and nutrient-rich soil surrounding the Dead Sea, the already well-known vitamin and mineral-packed moringa plant is enhanced even more. No wonder Dead Sea Moringa is considered by many to be one of the world’s foremost superfoods.

Today, more than ever, the benefits of Dead Sea Moringa are truly important to consider, both physically and spiritually. More than just a power-packed vitamin and mineral-rich supplement, Dead Sea Moringa is rooted deep into its spiritual connection to the land—the very soil where these and countless other biblical events took place.

With Dead Sea Moringa, you not only have the awesome opportunity to reap in the many physical benefits this super-nutritious supplement has to offer, but also the spiritual benefits and rewards of what God has promised through the land of Israel!

Contact us today for more information about Dead Sea Moringa and why the Dead Sea is the ideal region for growing the nutritionally dense moringa plant. 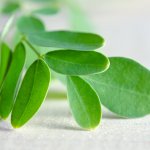 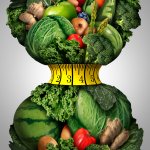